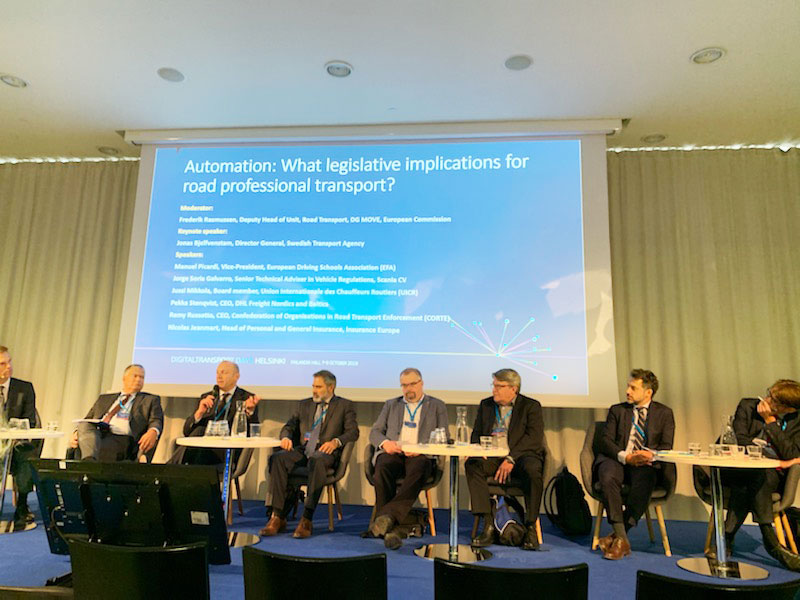 At September 24th EFA, the CTL (Center for Transport and Logistics), BrianSign (cognitive neuroscience) and Sacred Heart University of Milan visited the Joint Research Centre of the European Commission, in Ispra.

A special thanks to Biagio Ciuffo and Monica Grosso, the JRC officials who were very willing to show the structure, including the “Vehicle Emissions Laboratory (VELA) Labs”, the facilities to check the actual pollution of vehicles with EURO standards. EFA is committed to providing all the data at its disposal to support the production of scientific evidence for high-level driving training in Europe.

The Vial Week took place in Murcia from 3 to 10 October. Also this year the organization of the driving schools of the Province of Murcia (ARAMUR) organized the event to make citizens aware of road safety. EFA is very proud to have been invited and actively participated on the first day of the work. A good practice to export to Europe.

EFA was invited by DG Move to Digital Transport Days in Helsinki from 7th to 9th October. The goal was to listen to the driving schools’ point of view in the challenge of autonomous vehicles, in the freight transport sector.

The Commission’s idea is to think about the possibility of increasing the driving times indicated in Regulation 2006/561 EC, from 9 to 12 hours. If the vehicle is sufficiently autonomous, the driver could perform other activities while driving and therefore spend more time in the vehicle. This would allow you to reach some ports within Europe without having to make intermediate stops. EFA maintains that as long as the vehicle automation levels are SAE 3 or 4 the driver will always remain responsible and will not be able to perform other tasks inside the truck.

EFA signs a MoU with CS Mare. A new headquarter in Brussels

EFA signed the Memorandum of Understanding with the CS Mare Foundation. The agreement provides a series of mutual benefits, to extend its networks of contacts, to generate job opportunities, to collaborate in projects and to use the Foundation’s Brussels office. EFA new address is Rue de la Loi 223, 1000 Brussels. Anyone wishing to receive the CS Mare Foundation newsletter is requested to contact the EFA Secretariat to complete the necessary forms.

On October 16th the 2nd EFA Delegate Meeting for 2019 was held in Turin. The event has been organised with the help of UNASCA, the italian Driving School Association. More than 30 participants from around 20 countries. Different topics were discussed, from the commitment on the European territory to the evaluation of the 2006/126 EC Directive, passing through the amendments to the Statute and the change of headquarters in Brussels.

A warm welcome to the Albanian Association that has joined the European family. Favorable vote also for new affiliated members, such as the Piaggio Group and the Peruvian “Traction 4×4” which has expressed interest in participating in the activities of the European Federation of Driving Schools. The works ended with a toast to promote the presentation of the disposable breathalyzer (one of the sponsors of the event the following day)

EFA and Simusafe 2° Workshop in Turin

On October 17th the 2nd EFA and Simusafe Workshop 2019 was held in Turin. A great success, with more than 150 participants and 16 speakers in the different sectors of driving training and road safety. From the title “Technology and Training: a threat or an opportunity?” several factors have been addressed that are characterizing this difficult moment for the driving training sector.

The first topic dealt with was the threat of e-learning platforms that could never replace frontal lessons in driving schools.

The second part was about technology in practical training. On the use of the simulator in addition to road driving lessons and the complications that are arising with the massive incorporation of technology into vehicles. Driving schools cannot fight technology, but must exploit it to be able to offer an ever higher and adequate level of training for contemporary society.

Special thanks go to the two high-level moderators, who have always been able to keep the attention of the participants alive. EFA thanks Carlo Polidori (President of aipss.it) and John Lepine (EFA former President).

In the Members Area of efa-eu.com you can find a lot of pictures offered by Moldovian delegate Member. Thanks for these.

CIECA event on ADAS in Paris

In Paris on 23 and 24 October the CIECA workshop was held on “ADAS and their impact on the practical test”. Very interesting meeting with the explanation of the state of the art at the legislative level on vehicle automation. On the afternoon of the 23rd, practical experiments were carried out on the ADAS present in some SAE 2 and SAE 3 vehicles.

There are countries that take initiatives on the use of automatic gearboxes such as France, which many would like to follow, but which is not foreseen by the current Directive 2006/126 EC. A sure thing is that if you want to include ADAS in the examination vehicles, it will take an amendment to Annex V of the Directive 2006/126 EC, since the examination vehicles will have to have a sort of minimum European standard, otherwise there would be enormous disparities in the examination between one country and another, especially in countries where there is no is a compulsory training course”.

EFA participates in work related accident Conference in Varese (IT)

On October 25th in Varese (IT) the conference “the risks in home-work (in itinere) paths was held. Role of the human factor and opportunities for prevention”. EFA participated in the event and a speech was held on the role of driving schools in updating drivers. Most European drivers have a driver’s licence for at least 20, they have obtained it on vehicles that are very different from the current ones and need updating to new technologies.

The first step will be to correctly train the driving instructors, then also through the Companies, to disseminate more contemporary training to current needs.

Safety in the workplace also passes through a correct update on driving techniques and knowledge of ADAS in vehicles.

On 29 October in Brussels EFA meets two MEPs of the Transport Commission. EFA is organizing an event in Brussels for January 2020 involving several MEPs to raise awareness of the problems in the driving training sector.

Among the various problems faced is the Italian VAT issue following the European Court of Justice (ECJ) ruling and above all the awareness of the political world on the presence of online platforms that are destroying thousands of small businesses in Europe. The General Secretary Manuel Picardi says: “The goal must be to learn to drive, not to take the licence. The services offered by the platforms can be useful for storing important driving information such as road signs, but no platform can ever replace human awareness. Theory frontal lessons will always be necessary especially for topics such as behavior in the event of an accident, First Aid, Hazard Perception and general norm of behavior”. A French document was presented to defend training in driving schools, and we are discussing how to formulate a parliamentary question in the short term.

EFA EU August 2022 Newsletter
September 5, 2022
Recent Articles
Search
Go to Top
We use cookies on our website to give you the most relevant experience by remembering your preferences and repeat visits. By clicking “Accept All”, you consent to the use of ALL the cookies. However, you may visit "Cookie Settings" to provide a controlled consent.
Cookie SettingsAccept All
Manage consent