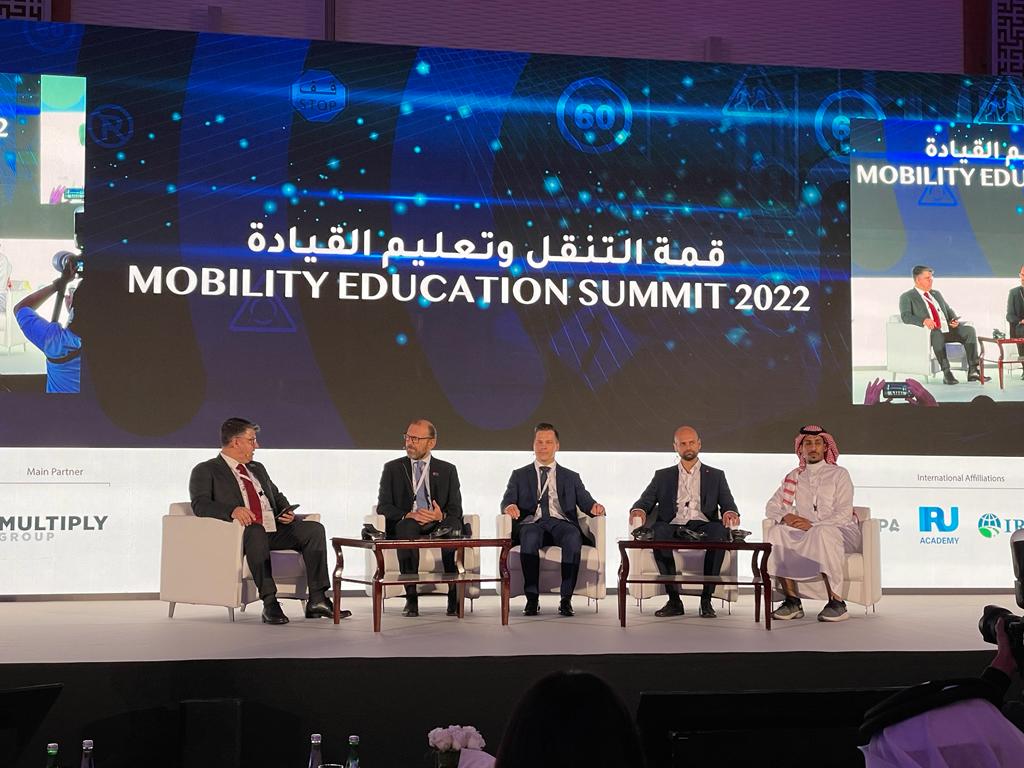 The Mobility Education Summit (MES) was held in Abu Dhabi on 14, 15 and 16 November.

Three days of very intense work, aimed at the mobility of the near future, focusing on the role of driving schools sector.

The Emirates Driving Company (EDC) hosted the event at the Abu Dhabi Exhibition Halls for the first two days, subsequently at its headquarters on the edge of the city.

The Summit, with the ambition to become the benchmark of road safety in the GCC (Gulf Cooperation Council) area in the coming years, aims to be the first of a series of steps to achieve significant improvements in the field of driving training. EFA played a key role in organizing the event, providing an important number of high-level speakers. For Europe, the representatives of the major national driving schools associations took the floor: France, Spain, Austria, Czech Republic, Estonia, Belgium and Italy. Each presented the main projects that have characterized the evolution of the sector in recent years.

There were also several speakers from other countries in the GCC area, who reported on the latest technological innovations in the driving training sector and how we could work in synergy with European countries for the development of joint projects.

On 14th November, during the afternoon of the first day of the MES, the EFA Delegate Meeting took place. EFA Board presented the strategy will be adopted towards the next driving licence directive, as well as the strategy in the years to come. If the directive will be published in February 2023, it will start an hard work of study and analysis, in parallel with the lobbying action at the TRAN Commission of the European Parliament, the Council and DG Move.

There are great expectations from the EFA. This should be the first time a EU directive talks about category B driver training, the separation of skills and knowledge, the role of driving schools and driving instructors.

During the EFA Delegate Meeting a few new associated members took the floor: Romanian University and the French EDISER, who had the opportunity to present their delegates and their projects.

M.me Claire Depré, the Head Director of the “Driving Licence” department of DG Move, who is dealing with the drafting of the next directive, wanted to leave a greeting video message addressed to the European driving schools, announcing some of the current news: progressive training, perception of dangers, ADAS, novice drivers and much more. The message was circulated to EFA members a few days ago.

The speech by Professor Luis Montoro of the University of Valencia on the future of driving schools, electric vehicles and ADAS was greatly appreciated.

Mr. Enrique Lorca (President of EFA and CNAE) and his staff, said he was very satisfied with the 51st Convention and reiterated the fundamental role that driving schools are playing at European level to improve road safety and how EFA is working to keep the role of driving schools active in Europe.

A high-level panel of industry and technology experts will discuss the the motorcycle industry’s latest initiatives in the area of decarbonisation, within the context of the EU’s climate targets and the industry’s Vision 2030+. They will be joined by a panel of public leaders from the EU and local levels to address current and future policies to place Europe on the path to climate-neutral transport.

The event will also focus on current and future decarbonisation technologies, underlining how they can best contribute to the fight against climate change, and the regulatory and technical barriers that still need to be addressed.

“What do novice drivers need to know today, what skills do they need to perfect and how do we test them?” The 55th CIECA General Assembly and Congress will take place on Wednesday 24 May and Thursday 25 May 2023 in Austria, at Wiener Börsensäle in the heart of Vienna. The deadline for the submission of abstracts has been extended until 19 December 2022.

The limited ability of drivers to detect and see correctly pedestrians in close proximity of their vehicle is a key cause of accidents, both for cars and light vehicles, and for heavy duty vehicles. Two new UN regulations adopted recently by UNECE’s World Forum for the Harmonization of Vehicle Regulations (WP.29) to address this issue will significantly increase the safety of vulnerable road users.

Motorcyclists delivering hot food who pick up jobs through digital platforms are more likely to be in a collision where their bike is damaged or someone is injured than those directly employed by restaurants, finds research co-authored by Heather Ward, the co-chair of ETSC’s Road Safety Performance Index programme.

EFA EU July 2022 Newsletter
July 29, 2022
Recent Articles
Search
Go to Top
We use cookies on our website to give you the most relevant experience by remembering your preferences and repeat visits. By clicking “Accept All”, you consent to the use of ALL the cookies. However, you may visit "Cookie Settings" to provide a controlled consent.
Cookie SettingsAccept All
Manage consent